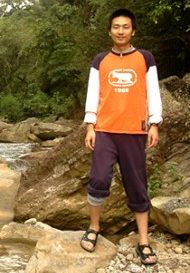 I grew up in Canton, China. I received my bachelor’s degree in 2008 at the biology department of Sun Yat-sen University (中山大學). My bachelor’s degree thesis was on taxonomy and morphometrics of gobies (Perciformes, Gobiidae) in south China. Then I went on to do my Ph.D. with Gil Rosenthal at Texas A&M, on the mechanisms and genomic patterns of reproductive isolation in Xiphophorus fishes. Now I’m a postdoc with Dario Valenzano, learning about the olfactory receptor evolution of N. furzeri and genome-wide patterns of selection in African annual killifishes.

I am broadly interested in the mechanisms and genomic patterns of speciation – the process that Charles Darwin called “the mystery of mysteries”.

The first step towards speciation is the establishment of reproductive isolation. I’m therefore attracted to the question of how reproductive isolation evolved between diverging populations in allopatry and sympatry (albeit more difficult). Among the different episodes in which isolation could occur, I am mostly interested in pre-mating, behavioral mechanisms that prevent gene flow. Female mate choice is an important aspect of pre-mating mechanisms, besides other processes such as intra-sexual competition.

Female mate choice in vertebrates is affected by a myriad of factors, both genetic, environmental and indirect genetic effects (IGE). On the genetic front, I want to understand how the female sensory system co-evolve with male signals, particularly in the olfactory sense. I choose this sensory modality mainly due to the fact that the group of fish I study (Cyprinodontiformes) use odorants to discriminate heterospecific males during mate choice. Instead, preference for the visual cues are often asymmetrical, i.e. preferring heterospecific males. For my Ph.D. work with Gil Rosenthal, I studied expression changes and molecular evolution of odorant receptors in Xiphophorus with RNAseq.  After joining Dario Valenzano’s lab at MPI-AGE, I hope to leverage the advance molecular genetic tools in another cyprinodontiform – Nothobranchius furzeri – to better understand developmental dynamics and evolution of odorant receptors. A more ambitious goal is to identify receptors for species-specific sexual cues in N. furzeri, and see whether exposure to these cues affect life span in these fish, given that in many other model organisms exposure to sex pheromones reduce life span.

On the IGE front, I have found that females’ mate preference are affected by male phenotypes in the social context during development. Such IGE effects may lead of important consequences in terms of reproductive isolation on a genomic level. Currently I’m continuing to collaborate with Pablo Delclos on this project in Xiphophorus.

Besides the mechanisms of mate choice, it is interesting to infer the collective evolutionary patterns resulted from these individual events. To achieve this I wrote a forward-time, individual-based, parallelizable population simulator Admix’em. This simulator allows explicit modelling of mate choice as a function of genes, environment and indirect genetic effects. I used this simulator to study the effect of different types of imprinting on reproductive barriers.

Finally, it will be important to collect empirical genomic data to validate models inferred from our understanding of mechanisms. Using RNAseq data, I constructed a reticulate phylogeny of Xiphophorus, revealing a surprisingly high level of gene flow between clades. In collaboration with Molly Schumer, we looked at reproductive barriers reflected in the mosaic genomes of hybrid populations of two Xiphophorus spp.

Besides biology, I am interested in language evolution, in particular, phonetics. I have a keen interest in the evolution of Chinese languages and its hybridization with neighboring linguistic families. I am a native speaker of Cantonese and Mandarin. I can speak enough English as you may see already, and I’m learning German.